In this tutorial we will build the API for a blog app featuring CRUD (Create-Read-Update-Delete) functionality with Django Rest Framework.

It’s helpful–but not required–to have previous experience with Django. If you’re looking for a beginner-friendly guide I’ve written an entire book, Django for Beginners, on the subject.

Complete source code can be found on Github.

Modern web applications are increasingly built as Single-Page-Applications (SPAs) which feature a distinct frontend and backend. As opposed to the traditional monolith approach in Django itself–and other web framework like Ruby on Rails–SPAs require a backend API that can then be consumed by multiple frontends as needed. This approach works well when a company needs multiple frontend applications–mobile web, iOS, Android–to run off the same database. It is also arguably more “future-proof” since the frontend can change to whatever the flavor-of-the-month JavaScript framework is, but the backend remains stable the whole time.

The downside is that it takes more time and code to create a separate frontend/backend for projects.

An API (Application Programming Interface) provides an interface for developers to interact with an application’s database. Instead of just giving someone full access to a database, an API sets up rules, permissions, and endpoints for various functionality: login, logout, reading a list of blogs, individual blog details, and so on.

The traditional way to construct a web API is via REST (Representational State Transfer), a well-established architecture for how websites can communicate with one another. Since computers communicate via the web this means using the HTTP protocol which supports a number of common “methods” (also called “verbs”) such as GET, PUT, POST, and DELETE.

It’s important to note that since an API is communicating with another computer the information being shared is not what would be sent for a standard web page. When your browser requests, for example, the Google homepage, it sends HTTP requests and receives HTTP responses with HTML, CSS, JavaScript, images, and so on.

An API is different. Typically we’re only interested in the data from a database. This data is often transformed into JSON format to be efficiently transmitted about. The API will also have a series of well-defined rules for how a frontend client can interact with it via a REST architecture. To register a new user the frontend framework will need access an API endpoint called, for example, /api/register. This API endpoint contains both a specific URL route and its own set of permissions.

We will start the tutorial by building the models for a blog app in Django. Then we can add Django Rest Framework to transform it into a RESTful API.

First create a new directory on your computer for our code. I’ll place it on the Desktop in a folder called api but you can place it anywhere. Then configure our project.

We’re using Pipenv to install Django and activate a local environment. Then we create a new Django project called blogapi as well as our first app posts.

Since we’ve added a new app we need to tell Django about it. So make sure to add posts to our list of INSTALLED_APPS in the settings.py file.

Note that we’re also defining what the __str__ representation of the model should be which is a Django best practice.

Now update our database by first creating a new migration file and then applying it.

Good! We want to view our data in Django’s excellent built-in admin app so let’s add Post to it as follows.

Then create a superuser account so we can login. Type the command below and enter all the prompts.

Now we can start up the local web server.

Navigate to localhost:8000/admin and login with your superuser credentials. 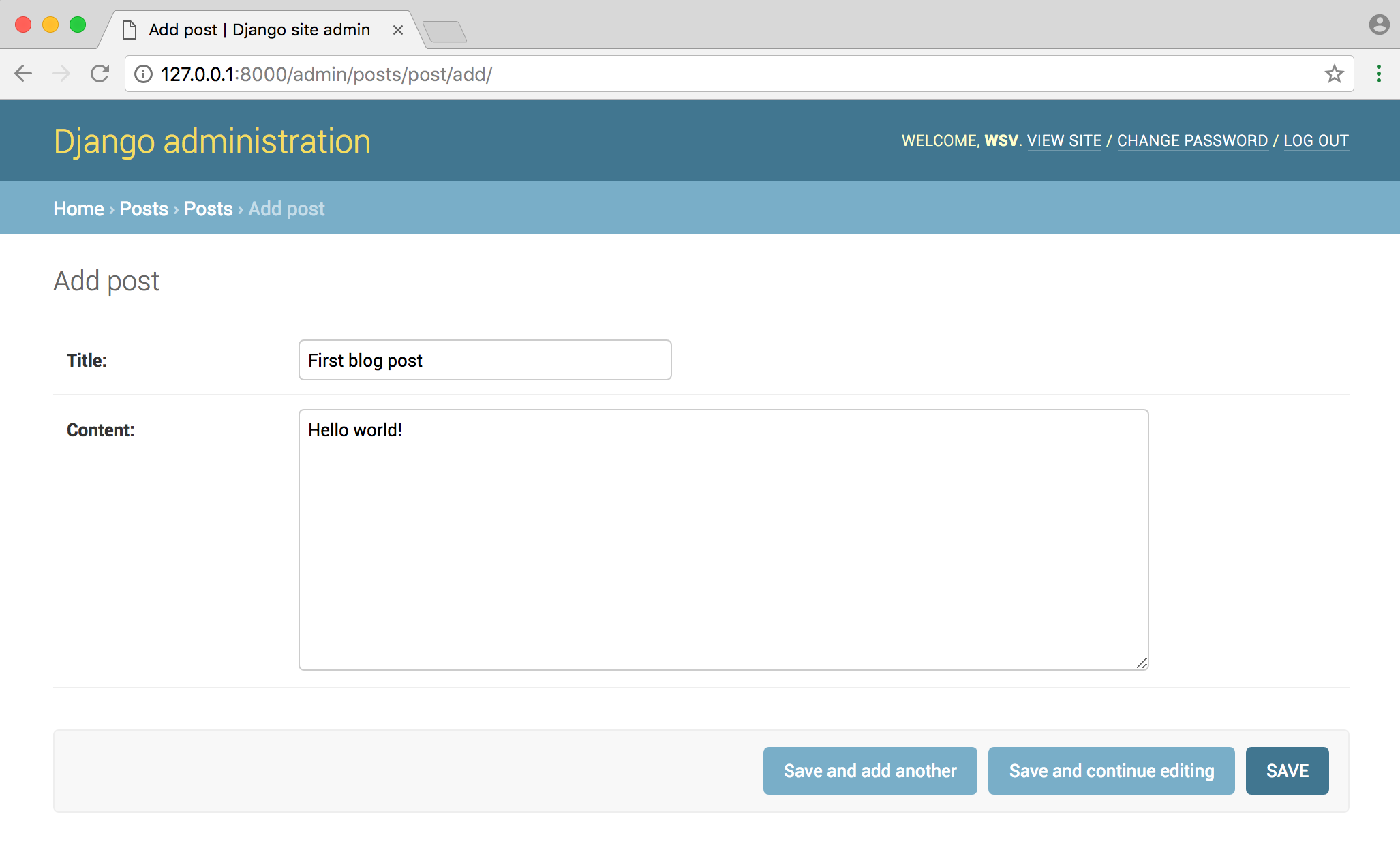 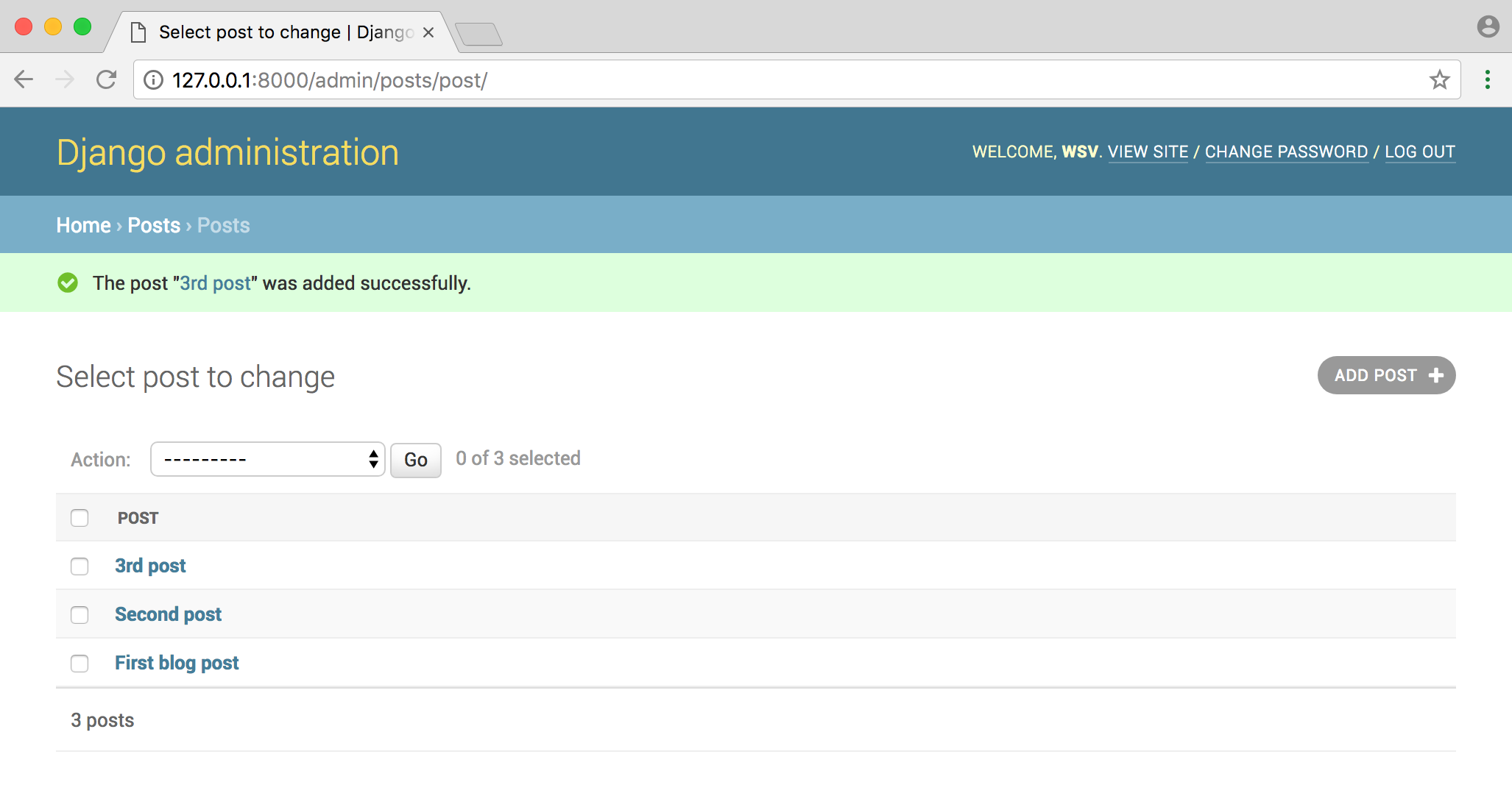 And we’re done with the Django part! Since we’re creating an API we will not need to create templates and views. Instead it’s time to add Django Rest Framework to take care of transforming our model data into an API.

DRF takes care of the heavy lifting of transforming our database models into a RESTful API. There are two main steps to this process: first a serializer is used to transform the data into JSON so it can be sent over the internet, then a View is used to define what data is sent.

Let’s see it in action. First stop the local server with Control+c and use Pipenv to install Django Rest Framework.

Then add it to the INSTALLED_APPS section of our settings.py file.

Now create a new serializers.py file in our posts app.

Remember that the serializer is used to convert our data into JSON format. That’s it. Here’s what it looks like.

On the top two files we’re importing serializers from DRF and our models. Next we create a serializer class and create a Meta class within it. The fields controls which database attributes are available. In this case we’re exposing all our fields including id which is the primary key Django automatically adds to all database records.

Next we need to create our views. Just as Django has generic class based views, so too DRF has generic views we can use. Let’s add a view to list all blog posts and a detail view for a specific post.

Update the views.py file in posts as follows.

At the top we import generics from DRF as well as our models and serializers files. Then we create two views: PostList and PostDetail. Both are just for GETs however RetrieveAPIView is for a single instance of a model. The complete list of generic views is on the DRF site.

The final piece is urls. We need to create the url routes–known as endpoints in an API–where the data is available.

Start at the project-level urls.py file.

We’ve added include to the second line of imports and then created a path called api/ for our posts app.

And then include the code below.

All blog routes will be at api/ so our PostList which has the empty string '' will be at api/ and postDetail at api/# where # represents the primary key of the entry. For example, the first blog post has a primary id of 1 so it will be at the route api/1, the second post at api/2, and so on.

Time to view our work and check out a DRF killer feature. Start up the server. 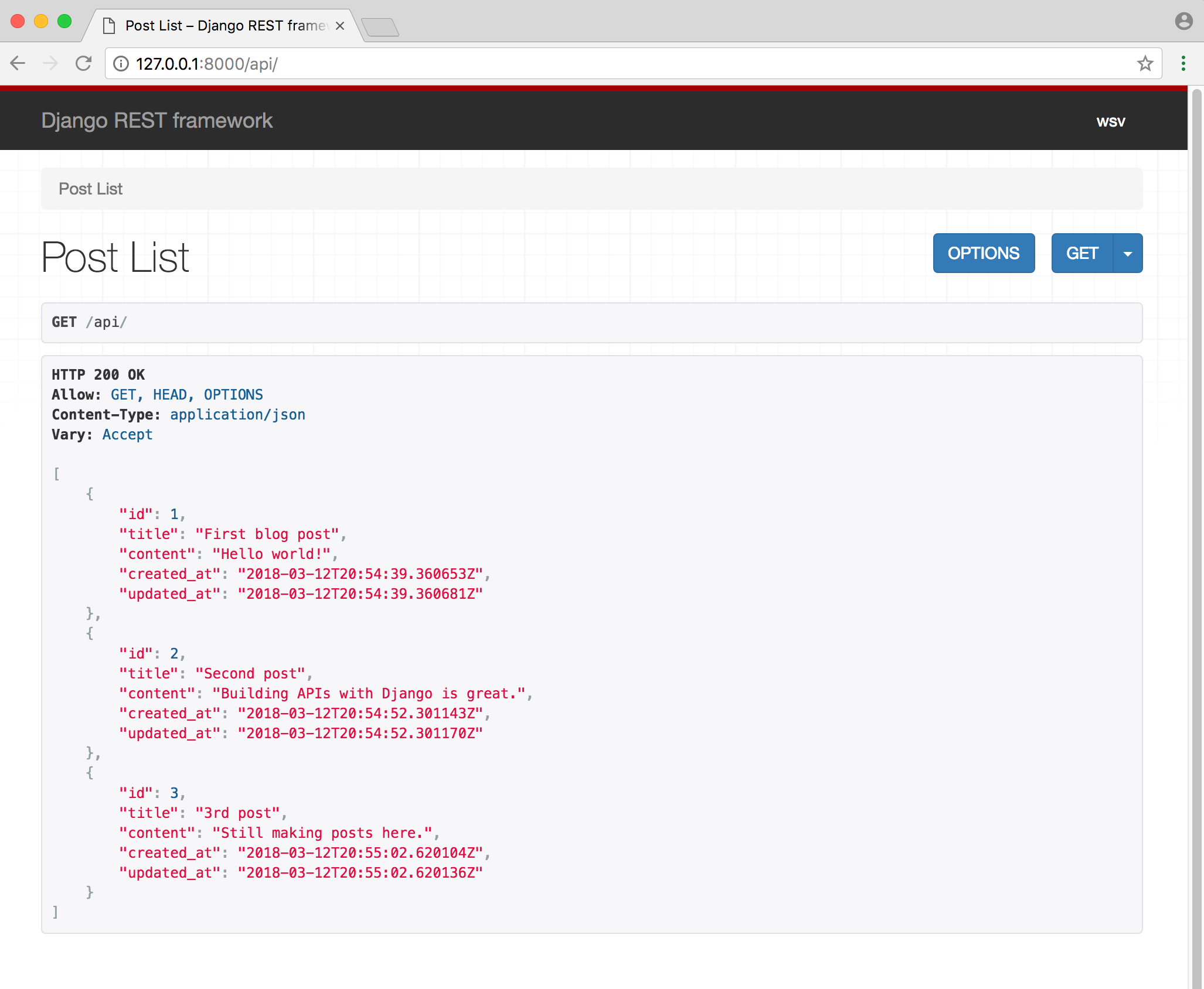 Check out that! The api/ endpoint displays all three of my blog posts in JSON format. It also shows in the header that only GET, HEAD, OPTIONS are allowed. No POSTing of data. 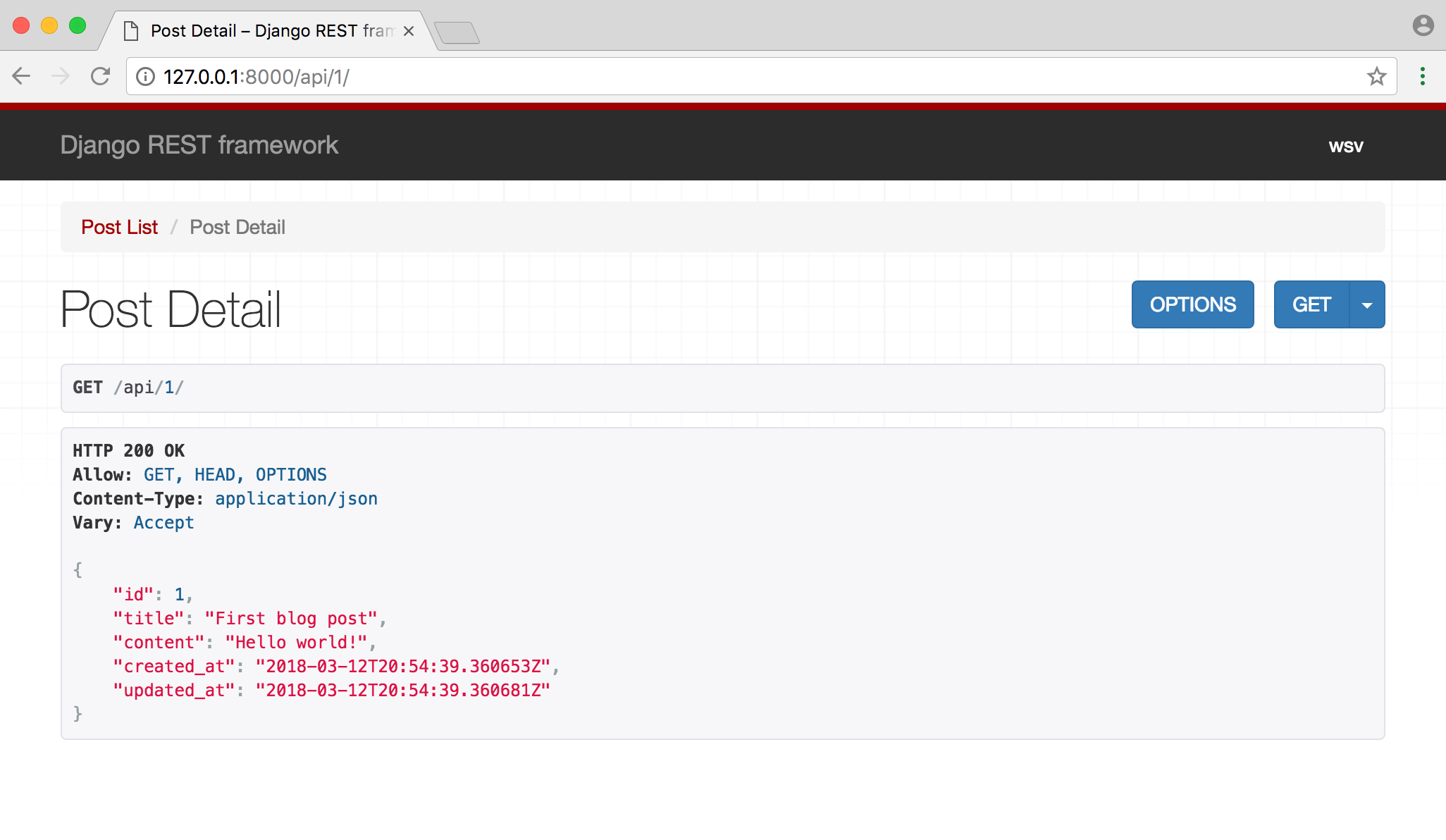 I promised at the beginning of the article that this tutorial would cover not just reading/getting content but the full CRUD syntax. Watch how easy DRF makes it to transform our API into one that supports CRUD! 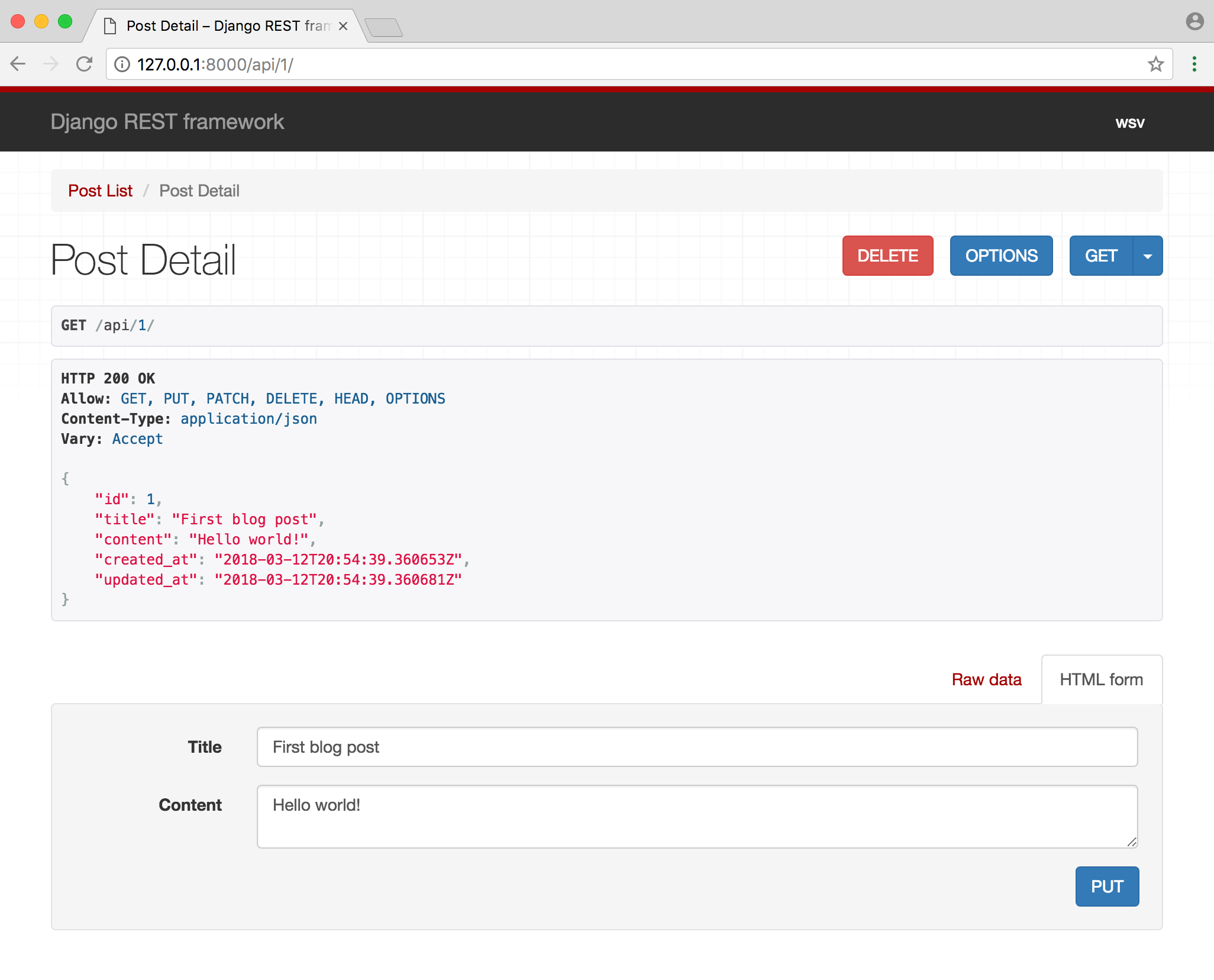 Then use the graphical interface for PUT at the bottom of the page to create a new entry. 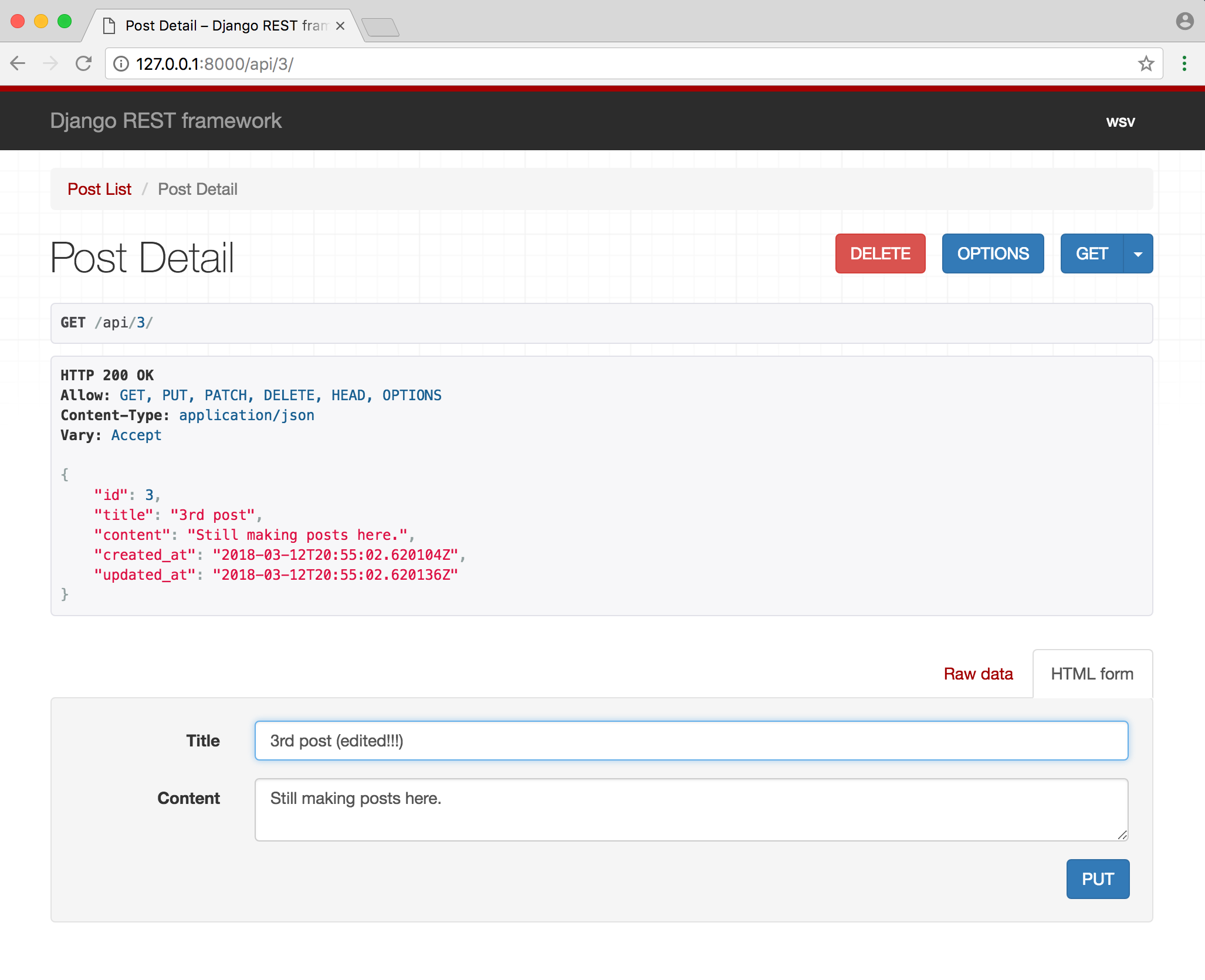 And you can GET it after making the change: 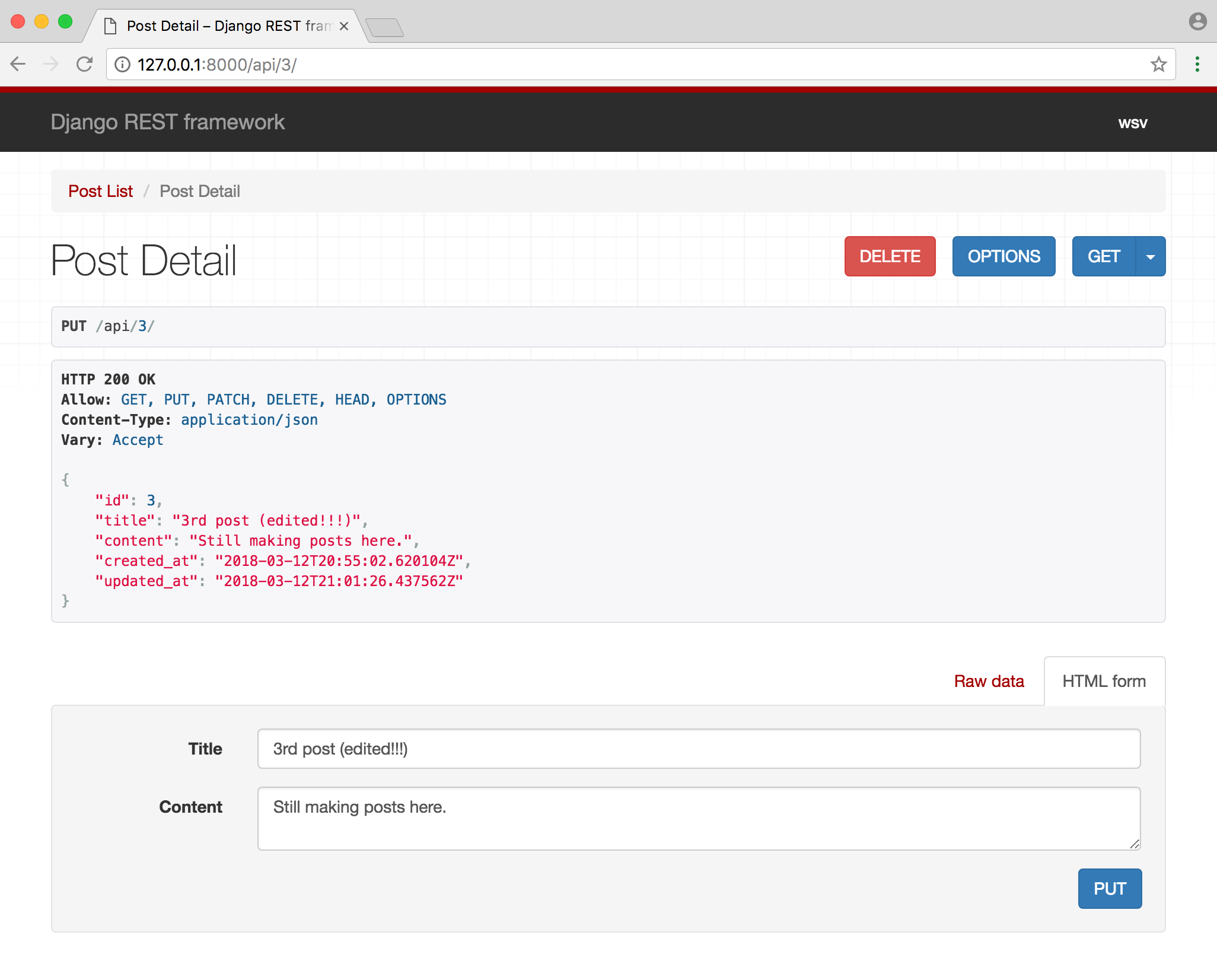 We’ve only scratched the surface of what DRF can do. Another popular feature is ViewSets which combined with a Router can dramatically speed up writing complex APIs. I’ve written a separate post on that, too: DRF Serializers, Viewsets, and Routers.

Want to learn more about Django APIs? I’ve written an entire book on the subject called Django for APIs. The first two chapters are available to read for free.