I read a lot of books but rarely find much to like within the business strategy segment. Typically they are high on fluff, poorly written, and repeat the same basic point over and over again. One exception is The Wide Lens by my favorite business school professor. The other, which I just read, is The Four by Scott Galloway, a professor of marketing at NYU and founder/co-founder of multiple firms. 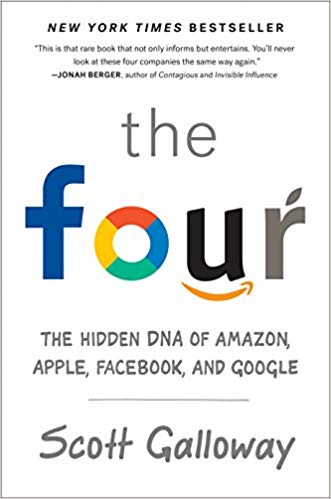 The book makes an eloquent case for why the big four tech companies–Apple, Facebook, Google, Amazon–should be broken up. But it also explains why they are so successful and likely will be in the near future. It’s rare to read analysis that’s so sharp (and funny).

Galloway touches on more than just the Four Horsemen as he calls them. The book is full of advice around managing one’s career, which I suspect comes from his work with 20/30 somethings at NYU and professionally.

If you’d like a taste of his style, check out this amazing presentation he did recently on The Big Four.

Here are a few choice lines from the book: