Competing in the Age of AI - Book Review

AI is traditionally thought of in the context of games such as chess and more recently Go where computers have proven superior to even the world’s best players. But as the amount of data collected grows, AI is being used almost everywhere, often taking the place of humans in deciding when to reorder supplies at a grocery store, the most efficient route for a UPS driver, dispatching a car with Uber or Lyft, and so on.

Two Harvard Business School professors, Marco Iansiti and Karim R. Lakhani, argue in a new book, Competing in the Age of AI: Strategy and Leadership When Algorithms and Networks Run the World, that AI is also changing both business strategy and organization. They put forth a combination of frameworks and case studies to make this argument, borrowing a key tenant from new AI advancements in algorithms which is that “computers are defining what humans should do, not the other way around.” In other words, give the computer as much data as possible, set some broad constraints, and let it determine the optimal solution to a problem. 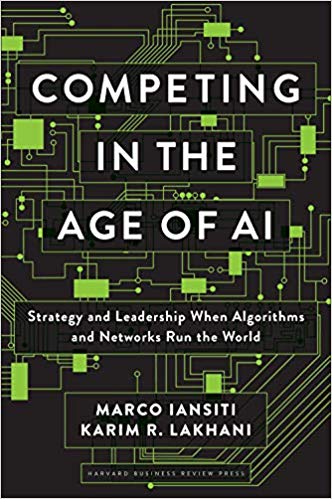 When a firm’s value relies heavily on its “decision engine” such as providing the right search result (Google), personalizing a newsfeed to increase engagement (Facebook), or recommendations on a video service (Netflix), AI is a natural winner. With data and algorithms, a virtuous cycle occurs where more data yields better algorithms yielding better results and a better user experience.

The authors cite the example of Ant Financial, an Alibaba spin-out that provides banking services to 700+ million in China via a 3-1-0 system: three minutes to approve a customer loan, one second for approval, zero human interaction. It started as a way to extend banking to low-income users and has become the de facto banking system in China and starting to spread globally.

As the authors note, “When digital technology, in the form of software and data-driven algorithms, replaces labor as the bottleneck in operating activities, the implications reach well beyond the obvious consequences for the workforce.”

Somewhat less convincing is the case study of Peloton, which seems more a result of online networks for exercise and replacing a trip to the gym, rather than a current use of AI. It may be the case that Peloton can leverage its data into a competitive advantage in the future, but to state that as the case today feels like a large overstep.

Later in the book the discussion turns to Strategic Collisions, when “a digital operating model targets an application that has traditionally been served by a more conventional firm.” The first example put forth is Airbnb and Booking.com vs Marriott and Hilton, an intriguing example but one not given full treatment. The challenge is described, not sufficiently analyzed or viewed with any predictive lens. And indeed, to lump Airbnb and Booking.com together seems a bit lazy. The former turns anyone’s home into a hotel while the latter is an online booking marketplace. They seem to tackle different pieces of the challenge faced by traditional hotel firms and can’t be waived away as “the software layer.” The second example is of Nokia vs Apple, where the authors argue Nokia sacrificed digital consistency–multiple operating systems which limited the app store market–an analysis which seems to miss a number of other reasons why Apple conquered.

Overall the authors describe AI and its use cases to an audience–business executives–who may be unfamiliar with its broad tentacles. This is to be commended. But many case studies feel too short: descriptive rather than predictive. There were no example of blended examples where AI does not simply replace humans but makes them better, such as is occurring in the medical technology space with professions like radiology and pathology. And the general topic of how should a traditional firm compete with a digital native rival deserves additional attention.